A Look Back at the Cold Brew Stubby: A Five Year History

Today, there is no longer a tiny space behind the Woodsman Tavern, neighboring the original Stumptown cafe on Division. There are no giant bladders of coffee sludge. There are no cold, lonely Brooklyn winters, spent in the middle of a big empty warehouse, shoes soaked in coffee. There are no kayak oars. But there were.

In a perfect world, Cold Brew, the stubbies, all of it, would’ve come to Stumptown founder Duane Sorenson in a dream. And maybe it did. But the catalyst that galvanized it — this slightly insane-seeming thing that would, in time, ship by the thousands to cafes and grocery stores across the country and become a major part of how folks come to know Stumptown — was frustrated baristas, and Duane drinking beer.

Our first foray into cold brew was brewed through something called a Filtron. Every night, baristas in each cafe would start the overnight cold brew process. The mechanics were pretty simple: you’ve essentially got a bucket, ten pounds of coffee, several gallons of water, a paper filter, a thick wool filter and a mesh filter. The coffee would brew all night, and then you’d drain the concentrate in the morning. But it was slow, heavy, and messy, and we were always running out.

“Duane and I were sitting together in the Stumptown office in the fall of 2010, and we were staring at summer number three of making cold brew in Filtrons,” says Vice President Matt Lounsbury. “The cafe managers were all telling us how hard it was on the staff and we were looking at each other saying, do we want to keep doing this?”

But all of us loved drinking cold brew and customers were really into it, too. So Duane had an idea. A difficult idea. But he didn’t see it that way.

“I was sitting in the office I shared with Matt, and there were empty bottles of beer laying around, and I remember sitting up and being like, ‘Fuck! We should start putting it in here,’ Duane says. "Fuck it, we’re going to put cold brew coffee in stubbies!” And they would look like Olympia Beer stubbies, a nostalgic nod to his father and grandfather’s preferred beer brand.

“My love for the stubby comes from growing up on Olympia Beer. It’s what I saw my grandfather holding more than he held his wife,” Duane says. 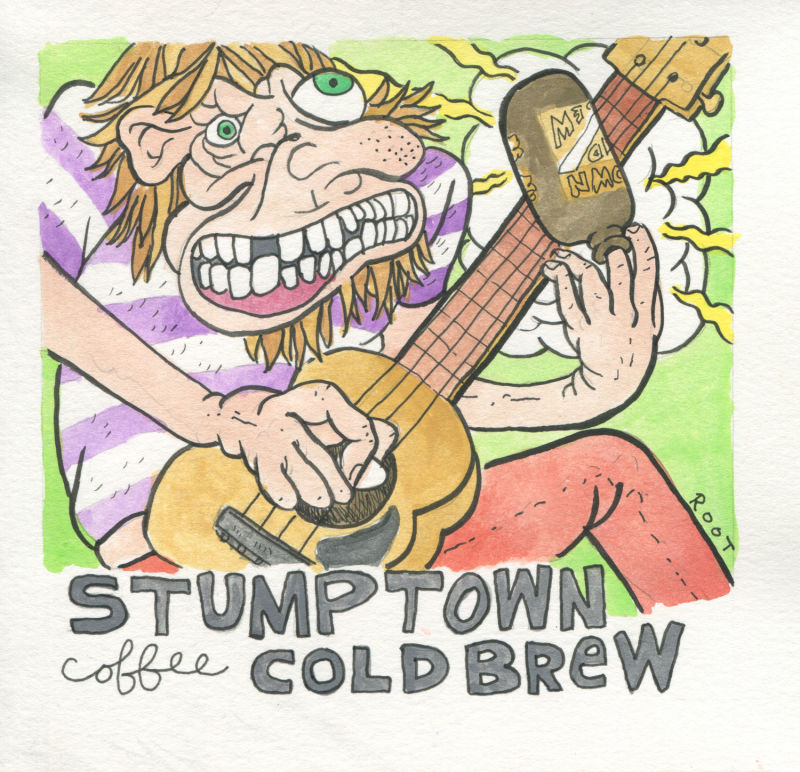 Here is how it works, or at least worked in those days: Duane had a vision. Everyone would say the vision was impossibly difficult, incredibly expensive, or hadn’t been done. (In this case, all three.) And then we’d do it.

Jim Kelso was tasked with spearheading the herculean effort. Jim was in charge of coffee quality control and was not entirely thrilled about the assignment. “I didn’t even like cold brew,” he says. But there was no question whether he would do it. “That was a different time. There weren’t enough people to do the jobs, so you did what Duane asked.”

Duane set the wheels in motion. He got some huge stainless steel wine casks, and secured space at House Spirits distillery. And then, the team — Jim, service techs Alex Lambert and Jason “Double J” Johnson — got to work. Alex and Double J were there to figure out the equipment; Jim’s job was to make sure it tasted OK. Which at first, according to him, it did not.

“It’s way better now,” Jim says. But in the early trial days, “There were so many fines, it was like cold French press.”

Cold Brew is actually a pretty simple process: it’s coffee and cold water and time. It is not, however, simple to figure out how to make it in large batches, bottle it, keep it cold and deliver it. “It’s pretty easy to make on your kitchen counter,” says Nate Armbrust, the Cold Brew technical services manager. “But it becomes a lot harder when it’s thousands of gallons at a time.”

But it was happening - the beginnings of Cold Brew, as we now know it. “It was very intimate at the beginning,” Duane says. “It was a boombox blaring metal on it, it was ground coffee, it was a big old pot or kettle, it was a garden hose and it was some dudes with long hair.”

“We just began by throwing coffee in the water and essentially making a giant french press,” Jim says. It wasn’t working. “It made this massive sludge in the bottom. Then we went to muslin bags, and basically made giant tea bags.”

These bags, he said, still left sediment in the coffee. And no one enjoyed squeezing them, which had to be done. “It felt like a bladder,” Jim says. “So we figured out how to do it in a really, really rough way, and then Ben came in.”

Ben Collet was the new kid delivery driver. He had been working at Stumptown for just over a month, and he overheard Duane talking to the sales staff about bottling cold brew.

“And a month later I see the bottle and was shocked to learn the bottle was already designed before we figured out the process.” Ben says, “But the bottle was very cool. We saw it and were blown away. It went hand-in-hand with the aesthetic of everything else we were doing at the time and yet it was like nothing we’d ever seen before.”

“(Portland Production Manager) Scott Hamilton offered me the job, and said, ‘Duane wants someone from the delivery driver team to own this responsibility … it felt like an honor to be considered,” Ben said.

Ben became Cold Brew. He was the brewer, the bottler, the delivery driver. He figured out that exactly 38 stubbies could fit in the delivery trays we use to transport coffee. He learned the hard way in downtown Portland in front of the Ace Hotel how much trauma a stubbie bottle can take before it breaks.

Ben and team were producing and bottling Cold Brew in a tiny back room in the Woodsman Tavern. They had moved into a prep kitchen that was shared with the restaurant staff. Every day, they had to unpack all the equipment, brew, and then pack everything back up. Nate Armbrust came on to lead production at this point, and he was amazed that “You could open the walk-in refrigerator and all our stubbies were in there, along with the lettuce from the Woodsman.”

There had been no fanfare, no signs, no social media. It happened quietly, one day in March 2011, the stubbies were delivered to our Portland cafes.

And people were stoked.

People would show up in a cafe and say, “Hey, I heard that you have Cold Brew in bottles?” and then would walk out with six.

“You go to all this trouble, and you get it done, and it’s instantly a smash,” Ben says. “All the cafe managers are like, ‘WE NEED MORE, WHEN CAN WE HAVE MORE?’ and it’s like, oh man, we just finished brewing it.”

Meanwhile, 2,442 miles away, our Red Hook, Brooklyn roastery suddenly started receiving odd packages — tanks and hoses and gaskets and assorted industrial supplies that seemed to have little or nothing to do with roasting coffee.

“Everyone was confused, like, ‘What’s the deal?’” recalled Chris Jakubowski, one of the new kids at the Brooklyn roastery. He’d been hired three weeks earlier. Steve Kirbach, who was the head roaster and operations director, pulled everyone working at the roastery into a meeting one afternoon. Steve said, ‘Hey, I’m sure you guys have noticed this stuff coming in. We’re going to do Cold Brew here.’

Steve asked for volunteers. No one raised their hand.

“He maybe even did a call like, ‘Nobody? Seriously?’ and I remember him having a not-impressed look on his face. So I raised my hand,” says Chris.

On early morning in the summer of 2011 before the sun was up, Chris hopped off the train, walked the 20 minutes through Red Hook to the roastery and met up with Jim Kelso who, had just gotten off the red-eye from Portland. Their job was to figure out how to make Cold Brew stubbies in Brooklyn.

“It was just the two of us,” Chris says. “It was a very long day. It was 14 hours of work from start to finish to get that first batch out. We made a mere 100 bottles, but it seemed like an infinite amount.”

Things did not run entirely smoothly.

Throughout the day, Jim kept having to run to the hardware store for a gasket or a tool; at one point, he headed to an outdoor store to buy a kayak oar so they could stir and agitate the grounds in the brew tank.

Then Jim went back to Portland and Ben flew out to New York for two more days of training, and then Chris, once again, was alone.

“At the end of the day, Ben was leaving to get on the plane and he was like, ‘Hey, I guess you’re the guy.’” At this point, Chris had been a Stumptown employee for a month, and in that month, had gone from being a production line guy to the head of a tiny empire, the man in charge of an entire city’s Cold Brew stubby supply.

The Brooklyn team then grew. “I remember my first interview,” says Brent Wolczynski, “they gave me a stubby, didn’t tell me I was hired yet ... but I do remember being so high on caffeine.” 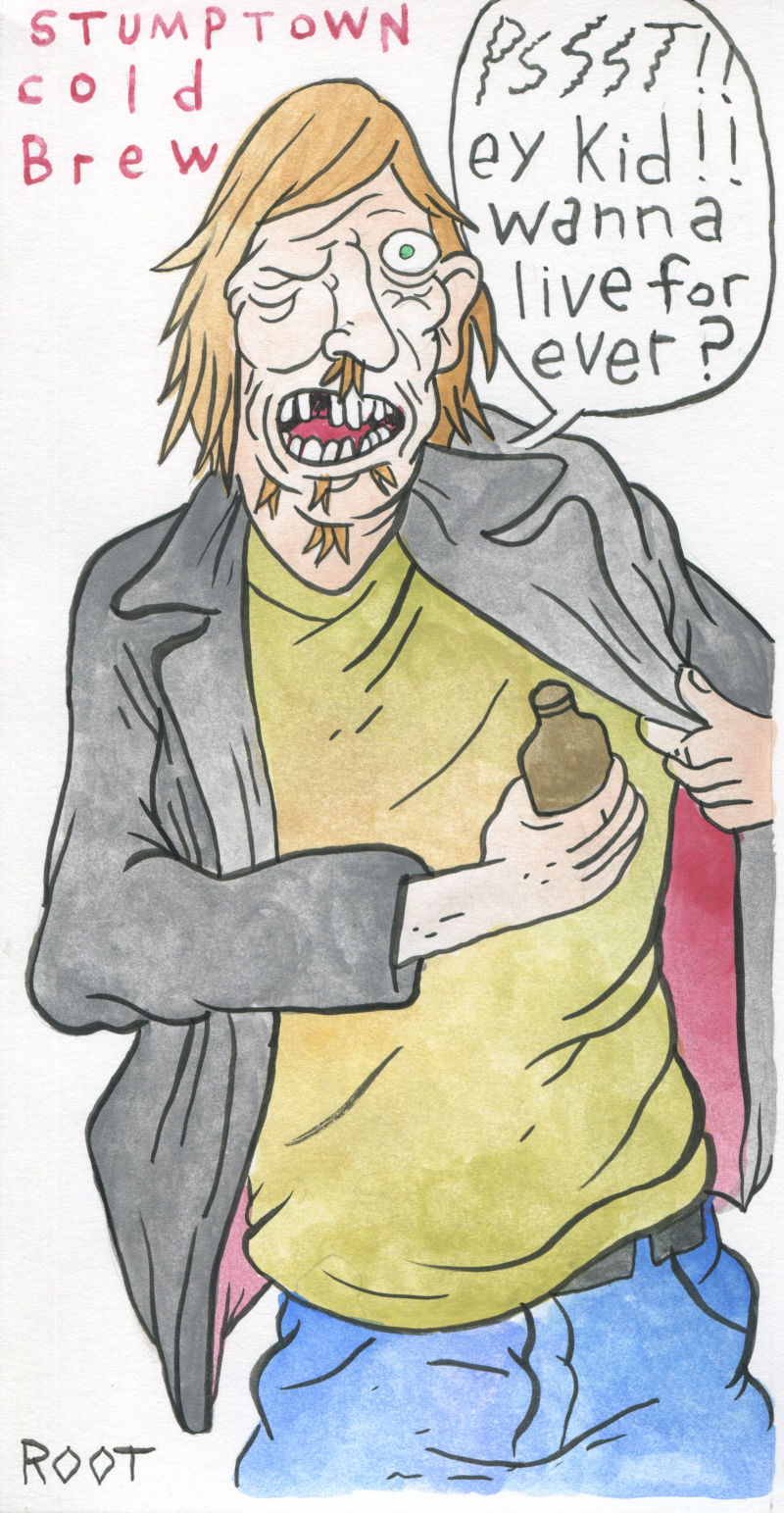 Now that the team was assembled, they found a giant, empty warehouse a few blocks away and set up shop. It was a terrifying place. “We built a room inside a room with these plastic, sort of translucent sheets. It looked like we were either making drugs or killing people.” says Brent. Chris says, “We called it 'The Murder Room.' It looked like something out of Breaking Bad.”

Then winter came. The small team was in a massive, unheated warehouse. Their feet were always wet, always cold because of poor drainage. It was not an easy winter. “We would do all our work in our winter coats,” Chris says.

So they persevered and then spring turned into summer, and business was booming.

“We started with regular fridges, and then we got a walk-in fridge, and then we started selling to Whole Foods,” Brent says. “I remember the first day we put a full pallet on a truck, 1,512 bottles of Cold Brew, heading out to Whole Foods up and down the east coast. That felt huge.”

“I felt very confident that people would buy cold brew coffee in a stubby because it would look cool and taste good. Did I ever think it would be this big? Fuck no,” Duane says. “What’s next? I don’t know. It makes sense to put it into a fucking jello shot, maybe.”